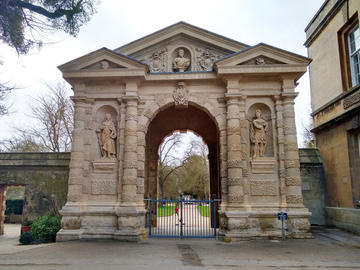 The Beecroft Building on Parks Road won one of the New Building awards, while the cleaning and restoration of the Danby Gate was the lone winner in the Small Building Conservation category. All the winners are available on the OPT website.

This is just the latest in a string of accolades for the Beecroft, now inhabited by the Physics department; it has already received a RIBA National award, been named RIBA South Building of the Year and a Constructing Excellence SECBE Award.

The Danby Gate, a stone archway leading into the Botanic Garden opposite Magdalen College, meanwhile, was transformed when a team of stone masons gently cleaned off many years’ worth of carbon deposits and organic material as well as repairing damaged stonework and carvings. One of Oxford’s earliest examples of neoclassical architecture, the gate was finished in 1622 with funds provided by Henry Danvers, 1st Earl of Danby, whose coat of arms, forming the arch’s keystone, remains in reasonable condition, unlike two other coats of arms above which have long since been illegible.

The bust of Danvers within the tympanum – the triangular space at the top of the structure – was found to be loose after the iron pin holding it in place had rusted, causing the metal to expand and crack the surrounding stonework – the team lifted it off, replaced the metal pin with a new stainless steel one and restored the bust to its former position. A skilled stone carver even repaired the statues of Charles I and II that flank the archway, restoring missing noses and beards. The arch had never been comprehensively cleaned within the last century as far as the team know, and it now forms a far more imposing entrance to the Botanic Garden, which is preparing to celebrate its 400th anniversary in 2021.