Members of the Conservation & Buildings team are working with external contractors to clean and repair the exterior of the grade II-listed Dyson Perrins building, occupied by the School of Geography and the Environment and the School of Archaeology 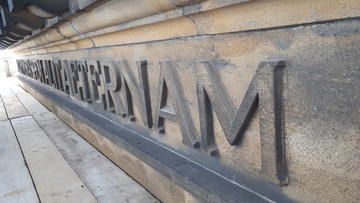 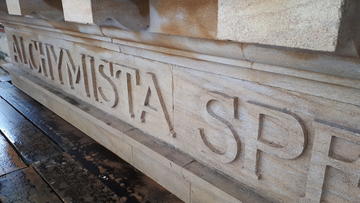 The project involves cleaning the brickwork and stone detailing to remove unsightly carbon deposits, repairing or replacing cracked masonry and repointing worn mortar joints where necessary. Contractors are also redecorating timbers and metal-framed windows, replacing any rotten sections of timber and treating rust. It started in July and should be finished in December.

The Dyson Perrins Laboratory is on South Parks Road and was built between 1911 and 1913, with an extension added to the building’s east in 1920-1922 and more extensions to the north incorporated in the 1940s and 1950s. The current maintenance work is concentrating on the first two phases of construction. The building is largely sheeted off to protect passers-by from falling debris, but the pictures provided here should give a sense of the improvement that the project is making. They show some of the lettering on the exterior of the building, before and after cleaning. The text reads ‘Alchymista Spem Alit Aeternam’, which translates to ‘alchemy/chemistry offers eternal hope’.