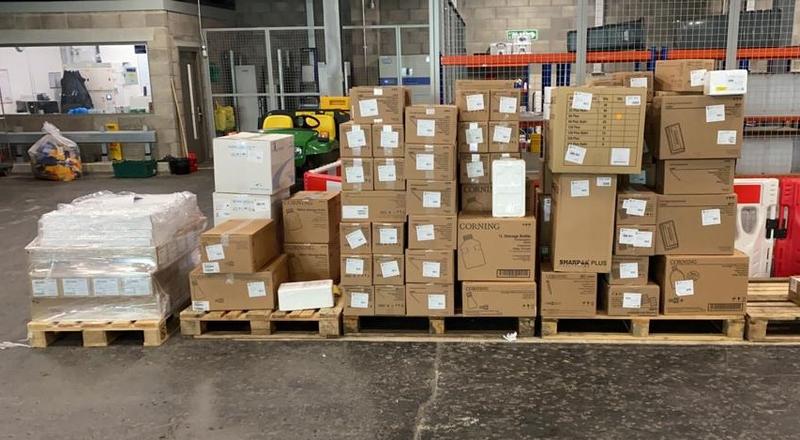 They have been receiving donations of personal protective equipment (PPE) such as masks, visors and gowns and redistributing it to local organisations that need it, including the John Radcliffe hospital.

Members of the Facilities Management (FM) team, who run the Old Road Campus Distribution Centre in the Innovation Building, were approached by the NHS, who asked them to work alongside colleagues in Medical Sciences to coordinate, organise and redistribute the large volume of PPE donations that were pouring in from all over the world. They agreed, and since then have been dealing with shipments of protective gear from donors ranging from the Chinese government to BMW Motorsport and the Pitt Rivers Museum.

While doing this the Distribution Centre staff have continued to play an important role in enabling the biomedical researchers at the Jenner Institute to scale up their operations rapidly, handling the large volumes of equipment and supplies that have been flowing into Old Road Campus.

People from other teams across FM volunteered to join the Distribution Centre team temporarily to help when a staff member became ill and had to self-isolate. The Joiners, ROQ staff and others who normally work elsewhere on Old Road Campus quickly stepped in to help, spending a couple of weeks doing whatever work was needed to keep deliveries flowing smoothly. The Distribution Centre team have also benefited from the cooperation of the Innovation Building's other occupants, Novo Nordisk and the Bioescalator, who have been very willing to work around any changes to the building's routine that have been needed.