The Facilities Management, Purchasing and Environmental Sustainability teams have been working closely with catering contractor Compass to make the University’s food more sustainable 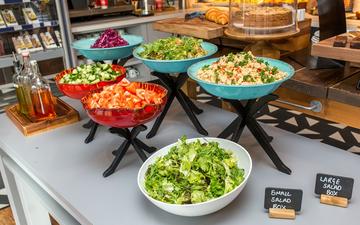 The Compass-operated cafe at the University Club is now accredited by the Sustainable Restaurant Association (SRA), after receiving two out of three stars in an April assessment. The other Compass cafes are also in the process of receiving accreditation.

Compass at Oxford have joined the Olio app, which aims to redistribute food that would otherwise go to waste to the local community. In April alone, Olio kept 228 portions of food from the cafes out of landfill, preventing the emission of 196 kilos of carbon dioxide.

The cafes have also:

Other departmental cafes have gone still further, removing disposable cups altogether to give customers a choice between china mugs and bringing in or buying their own re-usable cup.

Two electric vans for transporting ambient or hot hospitality food are also being introduced to reduce vehicle emissions, and there are plans to introduce ambitious new measures to reduce plastic waste even further.