New plaque commemorates the medical heroes of the Radcliffe Infirmary

A plaque has been unveiled on the old Radcliffe Infirmary building to honour the generations of doctors, nurses and all those who cared for local people there - an unexpectedly topical subject amid today's global pandemic

Now part of the University of Oxford as the Radcliffe Humanities Building, until recently this was a bustling city-centre hospital. It opened in 1770 and treated countless patients from Oxfordshire and further afield before finally closing in 2007, with all medical services moving to the John Radcliffe and Churchill Hospitals in Headington. 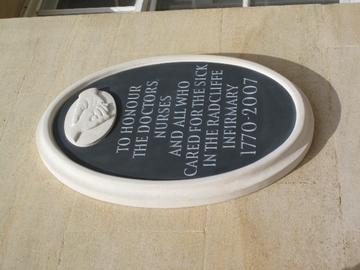 Over the years the Infirmary saw many medical breakthroughs - for instance, the first intravenous dose of penicillin was administered there in 1941. The recent plaque aims to honour all the people who made all this possible - doctors and nurses, many of their names no longer remembered, who devoted their working lives to treating those who needed it, as well as countless people who supported them, and cared for the building itself.

The project started in 2012 when Thelma Sanders, a nurse who trained and worked there, realised there was no memorial to the building's staff. She talked to fellow-nurse Xante Cummings and Dr Peggy Frith, herself a past student at the clinical school at the RI, who joined them at the suggestion of the University’s Medical Sciences Division. The three decided to put the situation right.

'Countless doctors, nurses and other hospital staff worked at the Infirmary to care for the people of Oxford, and those who trained here went all over the world to put their knowledge and skills to use,' says Xante, who trained and worked there, and is now President of the Radcliffe Guild of Nurses having been a nurse around Oxford throughout her career. The Guild is a society for alumni of the hospital or of the Oxford Brookes nursing courses, which also works to support new nurses in their training. 'We felt it was important to recognise all the work that was done here over the years,' she adds.

The three approached the University, which had incorporated the building into the Radcliffe Observatory Quarter project. After getting agreement on the idea of a monument, they settled on a design and began a long process of fundraising. Over the next eight years, they managed to raise almost £20,000 to pay for the plaque to be created and installed. This came mainly from members of the Guild, with further contributions from donors including the Radcliffe Trust, the University, the Doris Field Trust and members of the public. With the help of University staff including Aric Barcena, an architect in the Conservation and Buildings team within Estates Services, the installation was finally completed in May. The plaque is on the front of the building, facing the Woodstock Road in the iconic Triton quadrangle.

The memorial is designed by award-winning local artist Alec Peever, who conceived it in two parts - the plaque, and a column facing it with an inscribed poem - 'These are the Hands' by Michael Rosen written to commemorate the 60th anniversary of the NHS. The team would need to raise a further £24,000 to install the second part, and have not yet decided whether to try to do this.

Because of the pandemic, the unveiling was a low-key, socially-distanced affair, but the three organisers hope to be able to hold a proper ceremony when the pandemic finally recedes.

Thelma Sanders, Xante Cummings and Dr Peggy Frith at the unveiling of the plaque.