Members of the Building Inspectors team within Conservation & Buildings had noticed some damp in the roof. Assuming that the problem was probably blocked gutters, they had scaffolding put up and went up for a look. What they found was much more worrying – one of the pilasters (ornamental wooden pillars) that are mounted to the outside of the cupola had come loose and bounced down into the sump gutter around the edge of the roof, smashing roof tiles in three places on its way down. 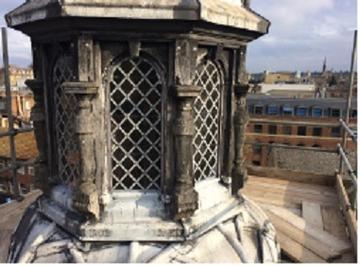 The team quickly took action, drawing on contingency funds within the budget and engaging specialist contractors. After replacing the broken tiles they set to work restoring the decayed oak woodwork of the cupola.

The pilaster that had fallen was too rotten to put back, and a replacement has been made and installed. The others were removed and repaired, replacing decayed wood.

The team also restored the wood around the cupola windows and treated everything with preservative before restoring them to place. Considering that there is no record of any major repairs to the cupola in its nearly 150-year life, it has endured the elements remarkably well and should now last for many decades before needing any more attention.

The team even discovered the old school bell still hanging in the cupola – it is still perfectly sound but has probably not been rung for decades. They would ultimately like to get the clock above the building’s main entrance working again, if budget is available for it.

Completed in 1880, the Old Boys High School is home to the Department of History and was designed by T. G. Jackson, also responsible for iconic Oxford architecture including the Bridge of Sighs and the Examination Schools. By the time it closed as a school in 1966, its former pupils included T.E. Lawrence (‘Lawrence of Arabia’) and Ronnie Barker.